Introduction: What are Glaciers?

A glacier is a mass of ice that forms over land, usually in an area greater than 0.1km2 and shows some form of movement (NSIDC, 2018).  Glaciers tend to form in alpine mountainous areas where snowfall accumulation often exceeds the rate of snowmelt for the the majority of the year.  As glaciers move in the direction of the sea, ice shelves develop over the ocean but are still connected to the land-based glacier.  When these ice shelves break off into the ocean they form icebergs, and are no longer referred to as glaciers (Bennet & Glasser, 2009). How are Glaciers formed?

There are three steps in glacier formation.

Step 1: Snow falls and accumulates faster than the rate of melting or ablation (Bennett & Glasser, 2009).

Step 3: Under intense compression from the accumulated mass of snow the firn grains recrystallize into glacial ice (Bennett & Glasser, 2009). 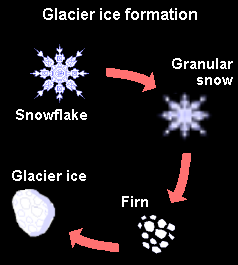 How do Glaciers move?

Glaciers move due to gravity, their mass exceeding the slope and basal pressure melting which reduces friction and allows the glacier to move more freely due to the water present at the base of the glacier.  (Bennet & Glasser, 2009). 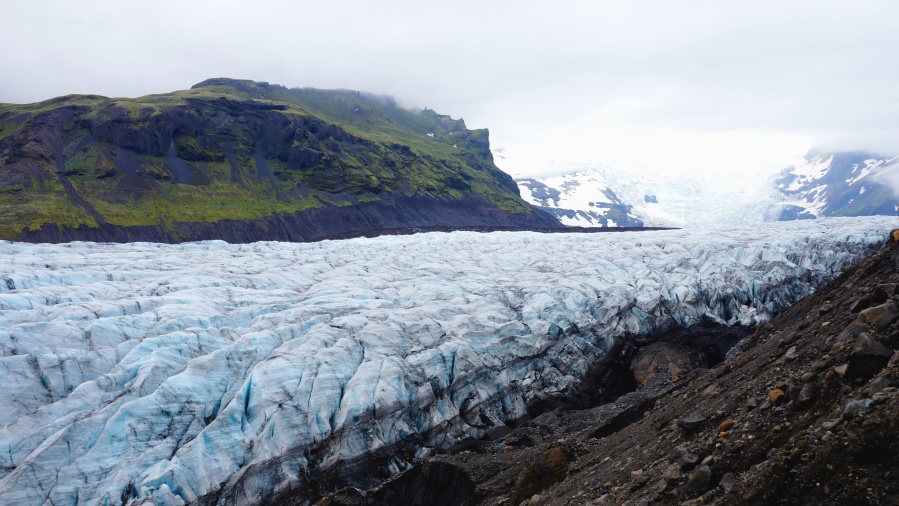 Why are Glaciers important?

Local Significance of Glaciers to Saskatchewan

During past Ice Ages Saskatchewan was almost completely covered by glaciers with the exception of Cypress Hills.  Glacial erosion gave us our beautiful northern lakes, flat plains for agriculture and deposited or exposed many valuable ores and minerals (Bennet & Glasser, 2009).

According to Bennet & Glasser (2009) Global Warming is causing glaciers to melt at a faster rate than glacial ice formation can take place.  Glaciers are composed of freshwater as they are created from accumulating snow.  If the glaciers were to melt the sudden influx of freshwater into the ocean would disrupt thermohaline circulation.  Thermohaline circulation is known as the great ocean conveyor belt, these currents are responsible for distributing nutrients and oxygen as well as moving warm and cold water which affects weather and land temperatures all around the world.  "Thermo" means heat and "haline" means salt, so these currents move due to differences in temperature and differences in salt concentrations.  Glacial meltwater would disturb thermohaline circulation for two reasons, firstly because the glacial meltwater is so cold, and secondly because it is freshwater not saltwater.  A sudden influx of glacial meltwater could effectively halt thermohaline circulation which would disrupt weather patterns all around the world, result in more severe storm events, have negative impacts on ocean ecosystems due to disruption of nutrient and oxygen circulation and could bring about a new Ice Age.  Also, if glaciers melt due to Global Warming there will be a rise in Sea Level which will cause a mass displacement of billions of people from island nations and coastal cities.  This would lead to a migrant and refugee crisis of unprecedented magnitude throughout the world.