This section provides a quick guide on how to prepare the drainage database file, an input file that contains the network topology and characteristics of the domain used in MESH simulations. A Digital Elevation Model (DEM) file and a land class file (in GeoTIFF or Shapefile format) are processed by the Green Kenue software to create the file.

For members of the Global Institute for Water Security, installation files for the 32-bit and 64-bit versions of the software are located at \\jade\WaterSecurity\Princz\GreenKenue. For others, these files can be transferred by request.

To determine what version of Green Kenue has been installed, from Green Kenue: 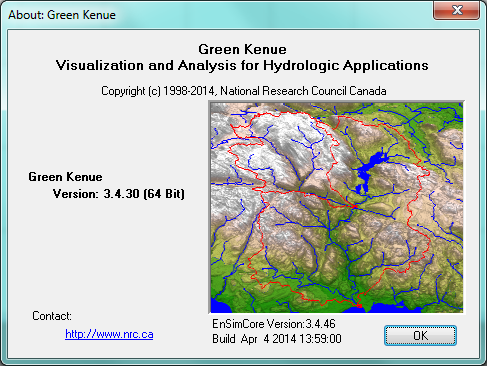 Provided the nature of deriving hydrology from a DEM, using a "hydrologically conditioned" DEM is recommended. A hydrologically conditioned DEM is one where the elevations in cells have been modified to remove pits (i.e., sources where flow can get trapped) and channels may have been "burned in" (e.g., by an unnatural drop in elevation along channel lines) to force processors to find pre-defined channels.

Some DEMs are already hydrologically conditioned in this way, such as HydroSHEDS and MERIT Hydro.

Some datasets may already combine different geospatial fabrics, such as the National Ecological Framework of Canada. Using an existing dataset that already combines the fields of interest may lessen the tasks required for pre-processing the file for mapping to the model grid.