By Abigail Wiebe and Mikayla McGrath 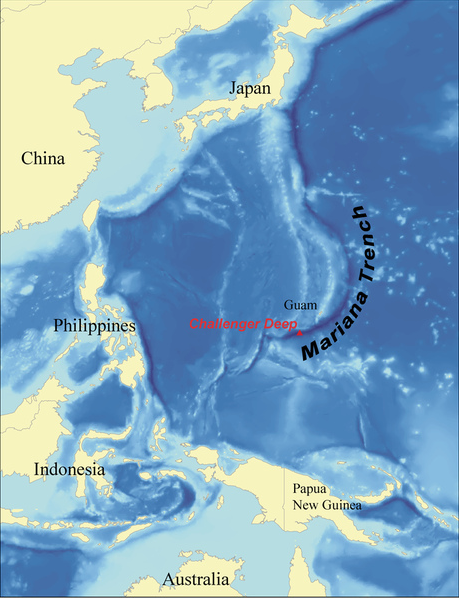 Mariana Trench is the deepest ocean trench and is located east of the Philippines, near Guam. It is a crescent-shaped scar in Earth's crust that measures more than 1,500 miles (2,500 km) long and 43 miles (69 km) wide (National Centers for Environmental Information [NCEI], 2017). The deepest part of the Mariana Trench is the Challenger Deep and it is located at the southern end of the trench. In 2010, the depth was measured at 10,994 meters (36,707 feet) below sea level (Oskin, 2017). At this depth, the Mariana Trench is cloaked in perpetual darkness with a temperature just a few degrees above freezing (National Geographic, 2012). The Sirena Deep is the second deepest point with a depth of 10,809 meters (35, 707 feet) (Oskin, 2017). The Sirena Deep is the second deepest point in the Mariana Trench with a depth of 10,809 (35,492 feet) and lies 124 miles east of the Challenger Deep (Oskin, 2017).

The Mariana Trench is largely unexplored because of hydrostatic pressure of 8 tons per square inch (1600 psi), which is than more 1,000 times the pressure felt at sea level (Oskin, 2017; NatGeoWild, 2016). In 1875, the HMS Challenger conducted the first measurement of the Mariana Trench, measuring a depth of 8,184 meters using a rope with a lead weight (NCEI, 2017). Sonar technology was used for the first time in 1951 to survey the ocean floor by the HMS Challenger II (NatGeoWild, 2006). This expedition discovered a deeper location with a depth of 10,900 meters (35,760 feet) (Geology.com, n.d.). In 1960, manned by United States Navy Lieutenant Don Walsh and Swiss scientist Jacques Piccard, the Bathyscaphe Trieste was the first vessel to reach the bottom of the Challenger Deep (Oskin, 2017).  In 1984, an expedition to measure the Mariana Trench was conducted by a Japanese survey vessel using multibeam echo sounder (NCEI, 2017). In 1995, another expedition was undertaken by the Japanese submarine Kaiko to gather samples from the ocean floor (Oskin, 2017). The United State sent an unmanned robotic vehicle, Nereus, to the floor of the Challenger Deep in 2009 which spent almost 10 hours on the seabed (Oskin, 2017). In 2010, the University of New Hampshire measured the current depth of the Challenger Deep (10,994 meters) using a multibeam sonar and two years later, James Cameron conducted a solo dive in the submersible Deepsea Challenger to collect data and unknown specimens (NCEI, 2017).

Life in the Mariana Trench

Recent scientific expeditions, like Cameron's (2012), have discovered life in the harsh conditions of the Mariana Trench. Organisms living in the deepest parts of the trench survive in complete darkness and the extreme pressure. Three of the most common organisms found in this depth are

How the Mariana Trench was formed

Earth's crust is made up of tectonic plates. These plates are comparably thin and "float" on Earth's mantle (NCEI, 2017). While floating on the mantle, the plate edges bump slowly into each other and sometimes even collide head-on (NCEI, 2017). When two plates forcibly collide, the oceanic plate plunges downward into the mantle, while the continental plate is pushed up, thus creating a trench where the two plates intersect (figure 2) (NCEI, 2017). When one part of the seabed dives beneath another, a subduction zone is produced (Lovett, 2012). The Mariana Trench marks such a subduction zone. It is located at the convergent boundary of the Pacific Plate and the Philippine Plate (Geology.com, n.d.). Both plates move in the same direction, however, the Pacific Plate moves at a faster rate and collides with the Philippine Plate, diving underneath it into the mantle, thus, forming the Mariana Trench (Geology.com, n.d.).

Why is the ocean so deep here? 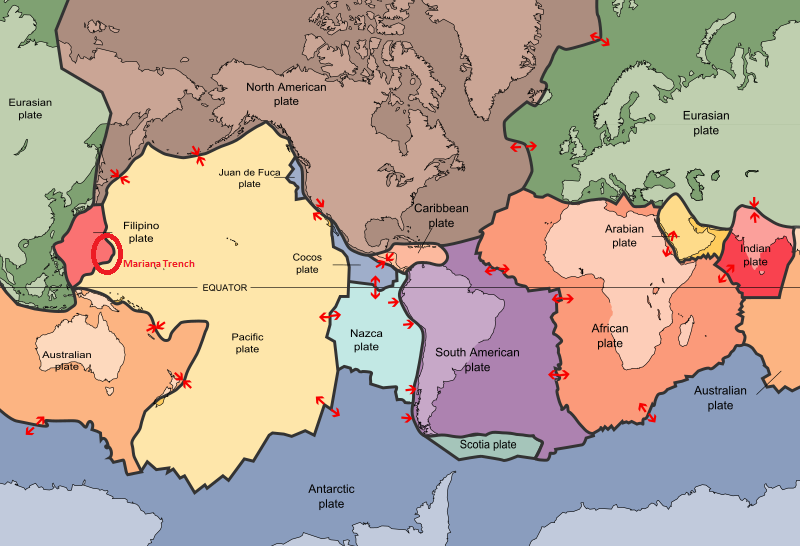 The ocean is so deep at the Mariana Trench because of the nearby fault lines the Pacific Plate into a narrow tongue (Figure 3) (Lovett, 2012). Fault lines are breaks or fractures that occur when Earth's tectonic plates move or shift (Your Dictionary). This narrower strip allows the Pacific Plate to bend more steeply downward than at other subduction zones, which is why the Mariana Trench holds the record for the deepest ocean trench (Lovett, 2012).

Fault lines. (n.d.). In Your Dictionary. Retrieved from http://www.yourdictionary.com/fault-line

Oceanic trench formed along an oceanic-continental convergent boundary [Infographic]. (2006, May 21). Retrieved from https://en.wikipedia.org/wiki/Oceanic_trench#/media/File:Active_Margin.svg