The Saskatchewan River Basin (SaskRB) (Fig. 1) encompasses portions of the Canadian provinces of Alberta, Saskatchewan, and Manitoba, as well as a small portion of the US state of Montana. The SaskRB is situated in western Canada (98° - 118° W and 48° – 56° N), with a total drainage area of 406 000 km2 and approximate maximum dimensions of 1300 km east-west and 700 km north-south. The source of the SaskRB originates in the eastern slopes of the Canadian Rockies in Alberta, which includes parts of the Columbia Icefield. The two main tributaries of the SaskRB are the South and North Saskatchewan Rivers, both of which flow east and northeast through the Saskatchewan Prairies, before merging to form the Saskatchewan River, flowing through the Saskatchewan Delta (North America’s largest freshwater inland delta), and draining into Lake Winnipeg in Manitoba. The two tributary river systems are further subdivided into nine subbasins of the Bow, Red Deer, Battle, Upper North, Central North, Lower North, Upper South, Lower South, and Eastern Saskatchewan rivers. The Upper South basin can further be disaggregated into the Oldman basin and a small watershed draining from Montana, US. 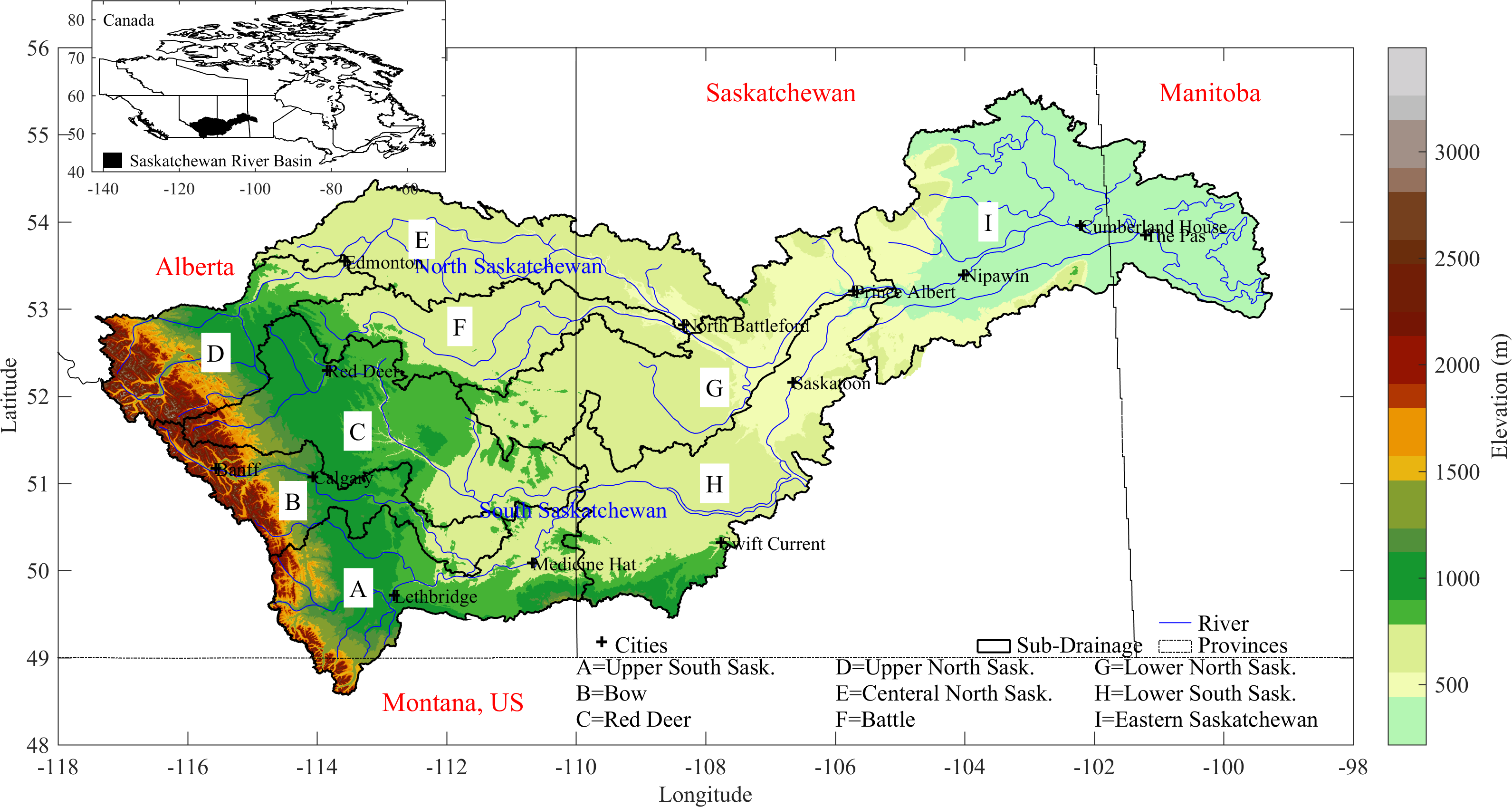 The topographic elevation of the basin ranges between 218 and 3487 m above sea level (Fig. 1). The physiographic characteristics extend from the rugged Canadian Rocky Mountains, foothills, and uplands on the far western side of the basin, to lowlands and plains in the remaining parts of the basin. The Ecozones of the SaskRB (Fig. 2) are classified into four ecozones; Montane Cordillera, Prairie, Boreal Plain, and Boreal Shield, covering 6, 58, 33, and 3 % of the basin area respectively. The Montane Cordillera Ecozone encompasses all the rugged mountains of the basin, the Boreal Plain has gently rolling to level topography, and the Boreal Shield contains hilly terrain with numerous ponds, wetland, and lakes. The Prairie Ecozone covers post-glacial undulating plains to rolling plains and flat terrain with numerous depressional areas. The Prairie have several unique features: the pothole topography prevents some areas from draining to the major river system, the ecozone has internal drainage, and connection to the major river system are intermittent (Pomeroy et al., 2010, Shook et al., 2013). The parts of the ecozone not draining to the major river system are commonly called “non-contributing areas”, defined as the drainage areas not playing a part in runoff in a flood that has a two-year return period (Godwin and Martin, 1975). Fig. 3shows the maximum possible extent of the non-contributing areas in the SaskRB based on a map from Prairie Farm Rehabilitation Administration (PFRA, Hydrology Division, 1983).

According to the Köppen climate classification, the SaskRB climate is classified as cold semi-arid and humid over the Prairies and cool and humid continental climate over the remaining parts, with a long, cold winter and a short, warm summer. The mean annual precipitation ranges from 601-800 mm in the Montane Cordillera to 201-600 mm in the Prairie and Boreal Ecozones. Most of the precipitation comes as rainfall between April and August, and snowfall occurs in winter between October and April. Much of the annual runoff is generated from snowmelt during early spring from the Prairies and during summer from the mountains. 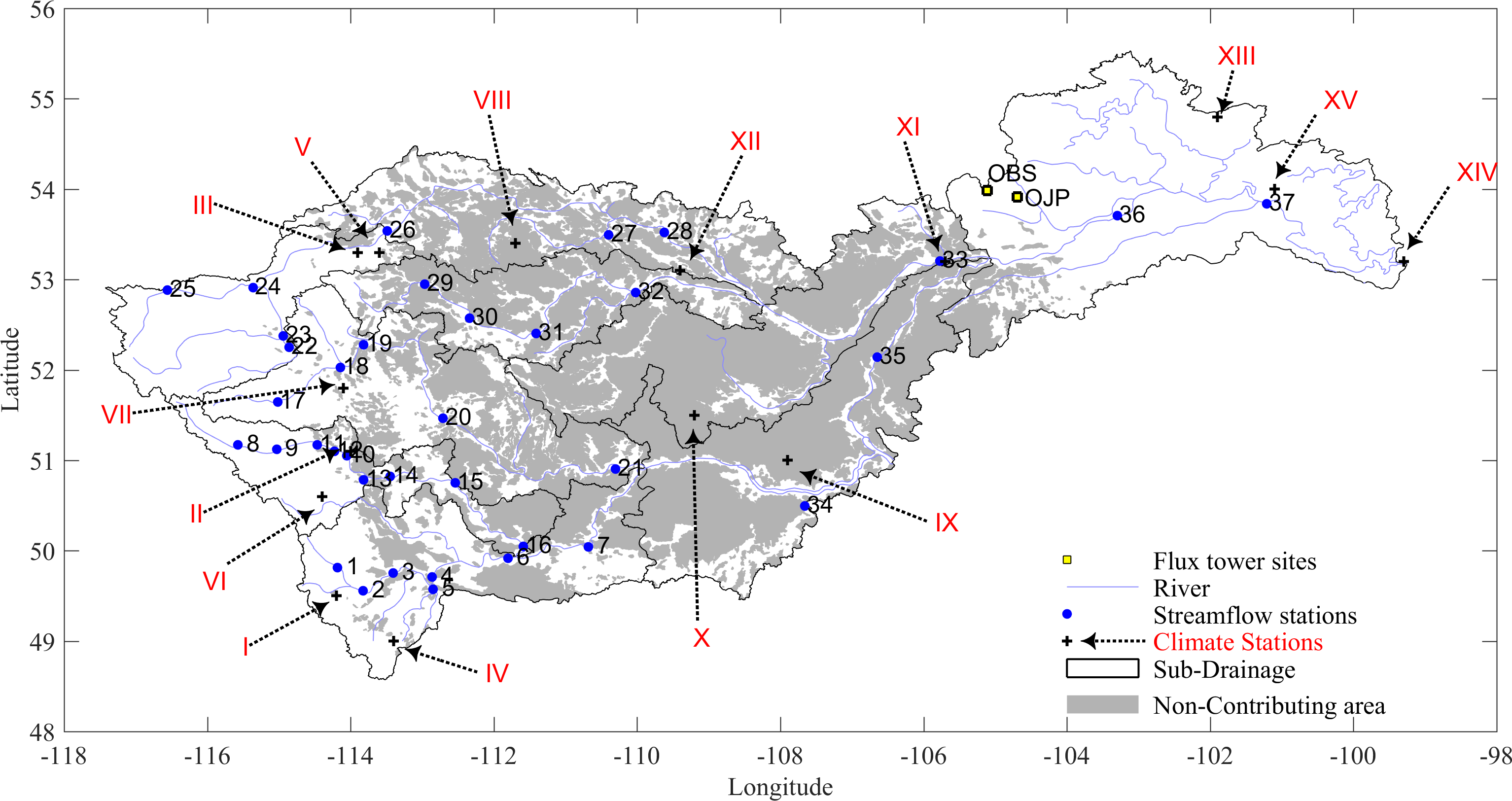 Figure 2 shows the land-cover of the SaskRB. The Montane Cordillera Ecozone is covered by barren land, glacier, grassland, shrubland, as well as needleleaf, broadleaf and mixed forest. Cropland and grassland dominate the land cover of the Prairies followed by depressional wetlands and lakes. The Boreal Ecozone around the upland and eastern part of the basin is covered by needleleaf and broadleaf forest, while the central flat land is largely covered by cropland with sparse broadleaf forest. The soil type in the Prairies is dominated by Chernozemic soils, clay-rich soils with a high water-holding capacity favorable for agriculture. The Boreal Plain soil types are Brunisol and Luvisol, productive for crop and tree growth. Both the eastern and a portion of the northwestern parts of the basin are underlain by mineral soils.

Thirty-seven streamflow stations available through the Water Survey of Canada for SaskRB have been used for calibration and validation purposes (Fig. 4 and Table below). These stations were screened based on two criteria, (1) having drainage areas above 1500 km2, and (2) streamflow data record lengths at least for the model calibration period (2003-2008). Twenty-two out of thirty-seven stations (60 %) have been used for model temporal calibration and validation, while the remaining 15 (40 %) stations were used for spatial validation (independent stations for validation). Drainage areas of the stations used for calibration ranged from approximately 1500 to 289 000 km2, and of those used for spatial validation ranged from 2580 to 389 000 km2.

The SaskRB is regulated by many reservoirs and diversions for hydropower production, irrigation, and other water supply. Irrigation is the major consumptive demand in the basin. In the Alberta portion, there are 13 irrigation districts providing water to 1 412 836 acres of farmland. In the Saskatchewan portion, 11 districts (80 000 acres) receive water from Lake Diefenbaker. Fig. 4 shows the major reservoirs and irrigation districts included. For details see (Yassin 2019b; Yassin et al., 2019a; Yassin et al., 2019b). 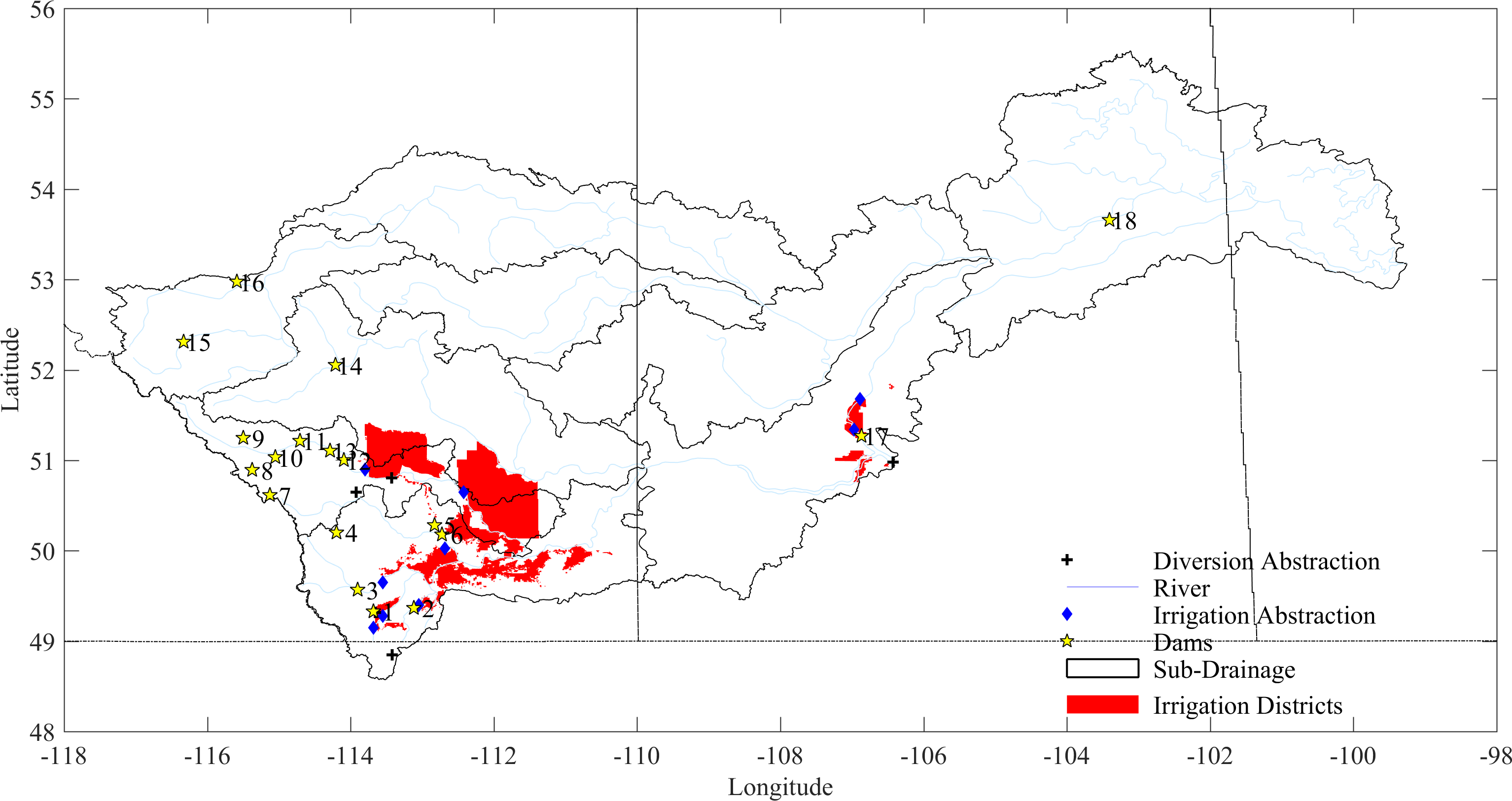