The Baker Creek watershed is located in the Northwest Territories (NWT) of Canada, with the outlet defined by the Water Survey of Canada (WSC) hydrometric gauging station 07SB013 - Baker Creek at Outlet of Lower Martin Lake - located approximately 7 km north of the capital city of Yellowknife, NWT. The Baker Creek watershed is a sub-basin of the Great Slave Lake watershed and has a gross drainage area of approximately 155 km2 (Spence et al., 2010). The basin is characterized by a number of large lakes drained by short streams with a highly variable flow regime due to the variability of storage capacity in the basin (Spence, 2006; Phillips, Spence, & Pomeroy, 2011). The basin is in an area of discontinuous permafrost, which also alters the runoff regime depending on the soil conditions (Kokelj, 2003; Guan, Spence, & Westbrook, 2010). The average streamflow at the basin outlet is 0.24 m3 s-1 and annual runoff ratio is 0.17; however, the runoff ratio has been observed to vary by up to three orders of magnitude, as observed by a runoff ratio of 0.005 in 2015 and 0.34 in 2001 (Spence & Hedstrom, 2018; Spence & Woo, 2002).

The Baker Creek watershed is largely undeveloped, and there are a number of research stations in the basin (Spence and Hedstrom, 2018). Research by the University of Saskatchewan and Carleton University has been occurring in the basin since 2004, with some water quality data available from 1995 (Changing Cold Regions Network (CCRN), 2019; Spence and Hedstrom, 2018). The basin is comprised of primarily exposed bedrock (39.9%) and water bodies (22.6%), with coniferous forest hillslopes and some deciduous forest comprising just over 21%, and peatlands and wetlands making up the remaining 16% (Spence and Hedstrom, 2018). The bedrock is moderately to highly fractured, and mineral soils (silty and sandy texture) are present in the fissures and valley from bedrock weathering and erosion (Phillips, Spence, & Pomeroy, 2011). Overburden thickness ranges from 1 m to more than 10 m (Spence & Hedstrom, 2018), and peat thickness ranges from a thin layer to about 1.2 m (Guan, Westbrook, & Spence, 2010). The area experiences a subarctic climate with short, cool summers and long, cold winters. The basin receives an average of 289 mm of precipitation annually, approximately 41% as snowfall (Environment and Climate Change Canada, 2019b). 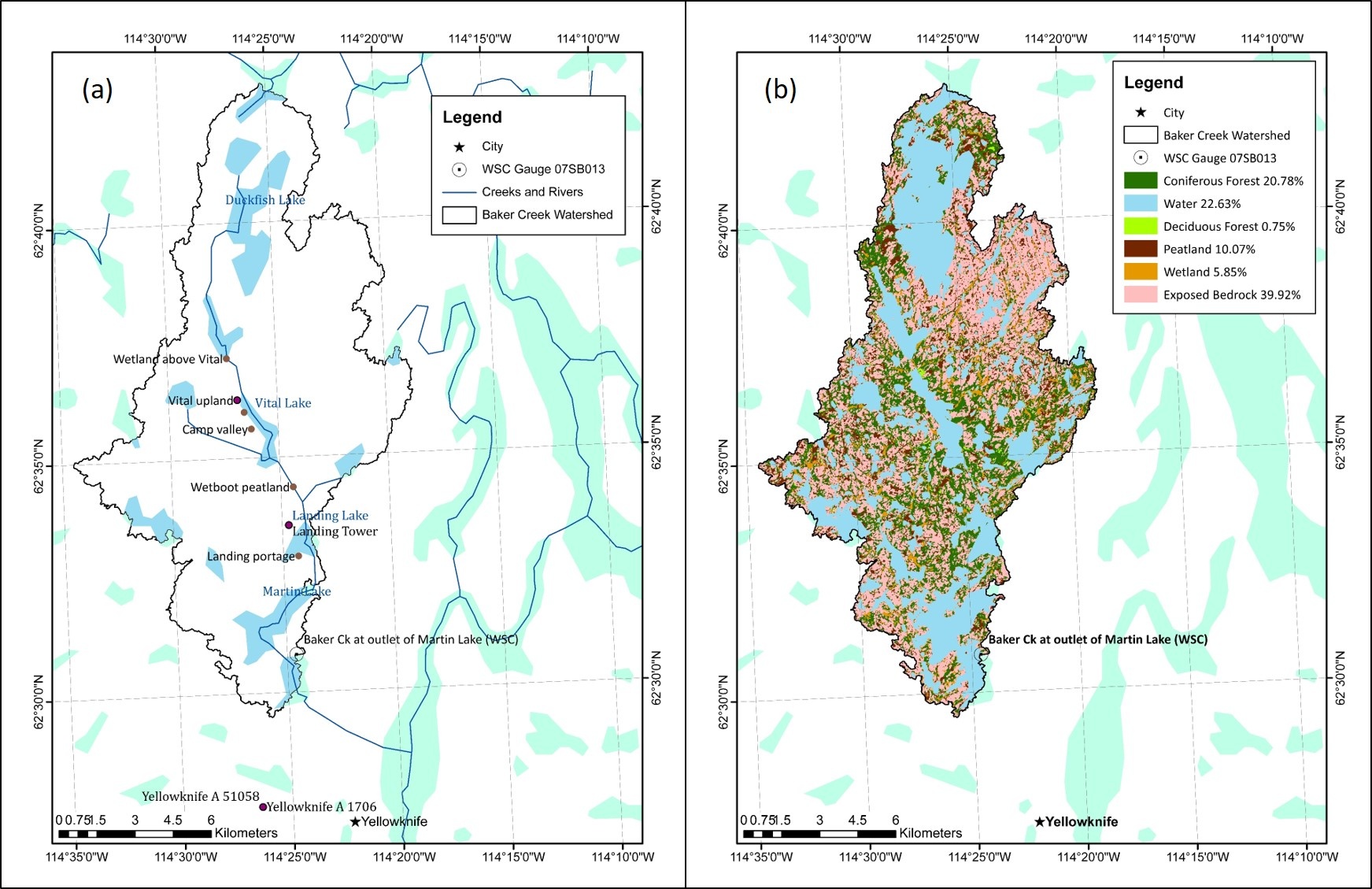 Landcover and station locations based on data from Spence and Hedstrom, 2018. Base maps from Natural Resources Canada.

There are no flow control structures in the basin, but there are a number of large lakes that have a significant influence on the flow regime. The largest and most hydrologically-significant of these lakes include:

The nearest long-term meteorological station is located at the Yellowknife Airport, approximately 7 km southeast of the basin outlet, with hourly data available from 1953 through 2019 (Environment and Climate Change Canada, 2019a). There are also two climate research towers located in the basin: Vital Tower and Landing Lake Tower (Spence and Hedstrom, 2018) with data available between 2005-2016. A more detailed summary of the available data is provided below.

Downloaded data from Spence & Hedstrom, 2018, Environment and Climate Change Canada, GEM, and CaPA are stored on Graham at the following path: /home/hbrauner/projects/rpp-hwheater/hbrauner/MESH_Project_Baker_Creek/Data/Raw